Some comments on the Unitary Patent System. 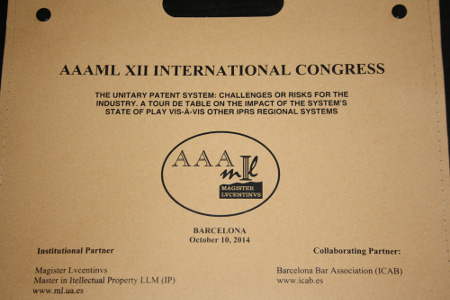 Last Friday the 10th, I had the pleasure to assist to a conference organized by the Magister Lucentinus Alumni Association (AAAML) in collaboration with the Barcelona’s Bar Association (ICAB).

The title was long and complex, as was the subject on issue: “The unitary patent system: challenges or risks for the industry. A tour de table on the impact of the system’s state of play vis-à-vis other IPR’S regional systems”. It drew, however, the attention of many colleagues who wanted to know, from a wide range of reputed speakers, the state of a system, which is that of the unitary patent, full of uncertainties and questions pending to be solved.

Before entering into what was said at the conference, it might be useful to make a short overview of the actual scenario.

On this regard, and after several decades of negotiations and failed initiatives in order to create a European patent with unitary effect, finally in 2012 Member States and the European Parliament agreed on what has been called the “patent package”. The package consists of two Regulations (Reg. 1257/2012 on the Unitary Patent Protections and Reg. 1260/2012 on the translation arrangements) and an International Agreement on the Unified Patent Court signed on June 20, 2013. It has to be pointed out that Spain, Italy and Croatia did not participate in the enhanced cooperation on the unitary patent protection. Italy, however, signed the agreement on the unified patent court whereas Poland has not signed it.

The patent package will enter into force once the Agreement on the Unified Patent Court has been ratified by at least 13 members, among them France, Germany and the United Kingdom. Austria, Belgium, Denmark, France and Sweden have already ratified the Agreement. It also has to be noted that two actions against the validity of both Regulations are still pending in front of the European Court of Justice (ECJ).

Taking these premises in mind, I would like to expose some of the ideas and, why not saying it, doubts that arose from the mentioned conference:

To conclude: a very interesting conference dealing with probably the most controversial and, yet, thrilling topic -actually and in the years to come- in the IP sector.